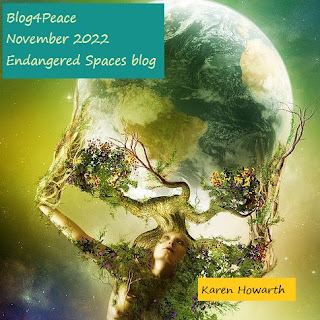 We are All Connected

Earth and its inhabitants are connected.  As we do to the Earth, so shall be done to us. In a letter from Chief Seattle, Chief of the Dwamish, Suquamish and allied Indian tribes to Franklin Pierce, President of the U.S.A (1854), the sentiment is well stated:

The Web of Life is Choking the Earth

Warming sea temperatures impact coral reefs, habitat to the most biodiverse ecosystems on the planet. Warmer water temperatures can result in coral bleaching. Increased heat stresses coral and causes the coral to release an algae called zooxanthellae from their tissues. The coral turns white. When a coral bleaches, it is not dead, but stressed. It may recover, but more than 90 percent of the Great Barrier Reef coral is bleached. Out of 1036 reefs surveyed by Australian scientists in a plane, 40% had no or negligible bleaching, 35% had moderate bleaching and 25% had severe bleaching (gbrmpa.gov.aa).

Global warming is causing the ice caps to melt, which exposes tundra to sunlight.  As tundra heats, it releases methane, a powerful greenhouse gas. The melting of  ice caps, glaciers and sea ice is also causing the worldwide temperature of oceans to rise. Worse, ice and snow reflect sunlight and energy while land masses and the oceans, being darker, absorb heat, Rising sea levels are inundating wetlands, the buffer that protects inland areas from flooding.  Wetlands also provide nurseries for fish and mammals and rest areas for migrating water fowl.

We are Conducting War on the Earth

The way humans use and pollute natural resources is an atrocity. We are destroying what we require to live.  We have to drink water to stay alive. Yet, we continue to pollute and over allocate water resources. We must have air to breathe. Yet, wildfires, deforestation, pestilence and disease are decreasing the amount of life-giving oxygen and replacing it with greenhouse gas such as carbon dioxide and methane.

Through a process called photosynthesis, tree leaves take in carbon dioxide and water and use the energy of the sun to convert these elements into chemical compounds such as sugars that feed the tree. As a by-product of that chemical reaction, oxygen is produced and released by the tree. Trees thus become carbon sinks (storage) that holds the carbon back from reentering the air. It is proposed that one large tree can provide a day’s supply of oxygen for up to four people. (USDA.gov)  Unfortunately, when the tree is felled, the carbon is released into the air. 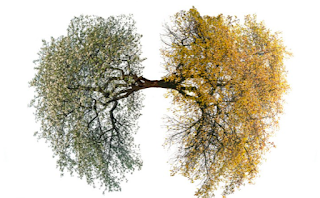 Water Everywhere and Not a Drop to Drink

Per- and poly-fluoroalkyl substances (PFAS) are manmade chemicals that do not break down in the environment. Researchers  have found PFAS  in rainwater in most locations on the planet - including Antarctica. There is no safe space to escape them. (University of Stockholm)

If that was not worrisome enough, we are in the middle of one of the three most severe droughts in the U.S in the last 100 years. (drought.gov)

Surf's Up!  No, That's Plastic

Plastics are the most common form of marine debris. They enter our rivers and streams and journey to the oceans. Once there, plastic debris never fully biodegrades. Common plastics include cigarette butts, food wrappers, beverage bottles, straws, cups and plates, bottle caps, and single-use bags.  Fishing paraphernalia, such as drift nets, fishing line, buoys and ice chests, endanger the lives of inhabitants of the seas.  Children's toys also pollute the oceans.  (NOAA)

There is now six times more plastic than plankton in the oceans (naturalscience.org). Plankton has a vital role in maintaining the health and balance of the ocean and its complex food webs. The oxygen, nutrients, and biomass they produce also sustain terrestrial life—from the food we eat to the air we breathe. (education.nationalgeographic.org). 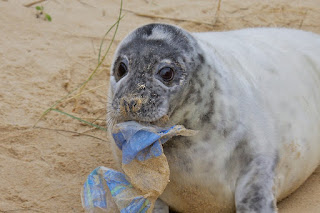 How Hot Is It?

In 2010, researchers came to the conclusion (doi.org/10.1073/pnas.0913352107) that humans would adapt to any possible global  warming. Peak heat stress, quantified by the term "wet-bulb temperature" (heat + humidity), was  similar in diverse climates--it  never exceeded 31 °C. Excess of  35 °C for extended periods should induce hyperthermia in humans and other mammals, as dissipation of metabolic heat becomes impossible.

New experiments provide insight into which combinations of temperature and humidity begin to harm even the healthiest humans, never mind our aging population. Current heat waves around the globe are approaching, if not exceeding, these limits (Noll Laboratory at Penn State University).

I have been an environmentalist for 45 years.  I have watched as everything predicted in the 60s, 70s and 80s happened. There is more I could share. What I wrote is the truth. You may find more information by going to the sources cited after information in the post. I only wish to share information so that you may have the facts. There are tipping points of which we must be aware. That is a point when we must have made changes or it will be too late to stop cascading events.  Some tipping points are approaching like a freight train and some come like a thief in the night.  Let us do what we can, while we can.  Let us save the Earth and ourselves.  God bless us all. 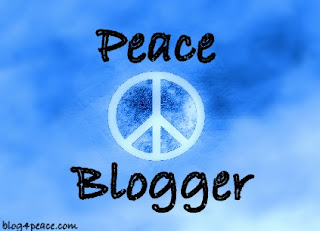 This is the 16th year for Blog4Peace.  Over thousands of bloggers in hundreds of countries participate each year.  Peace Bloggers write posts and publish peace globes each November 4th.  We do what we can to keep peace at the forefront of our conversations all year long on the Internet via websites and blogs. Read about how Blog4Peace began on Mimi's blog: mimiwrites.blogspot.com

"We must see that peace represents
a sweeter music, a cosmic melody,
that is far superior to the discords of war."
Martin Luther King Jr

Posted by CyberCelt at 8:20 AM No comments:


The Ancient Globe is an incredible application where you can see the Earth at different stages that you chose.  You can select age of Earth, when first animals walked, when plants developed, and even where your town would be located millions of years ago. 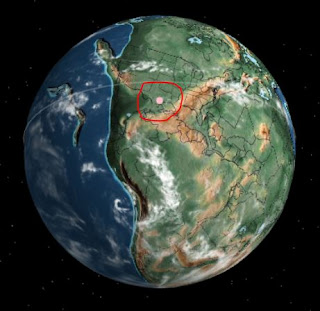 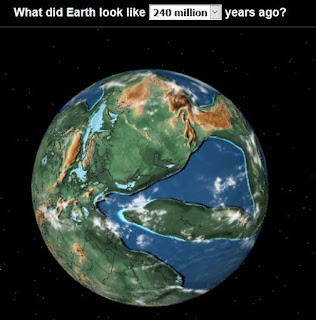 The Ancient Globe was created by Ian Webster, while working for Asterank (database of 600K asteroids).  Plate tectonic and paleogeographic maps were produced by C.R. Scotese, PALEOMAP Project

To keep the Globe public, he hosts it on his dinosaur website at:
http://www.dinosaurpictures.org/ancient-earth/.  He developed this globe so that children could visualize the changes they talk of in geology and ecology.

If you have children in school and unless you know all about the Triassic, Jurassic and the Cretaceous periods as well as where the Pangea or Pannotia super continents were located, you should bookmark this: http://www.dinosaurpictures.org/ancient-earth/.


My Peace Globe below indicates the Ten Indicators of a Warming World as provided by National Oceanic and Atmospheric Administration (NOAA.gov).

Whatever you think about climate change, no one is much disputing the fact of global warming.  Now, the only thing to argue about is 1) is it the fault of humanity; and 2) how do we fix it. 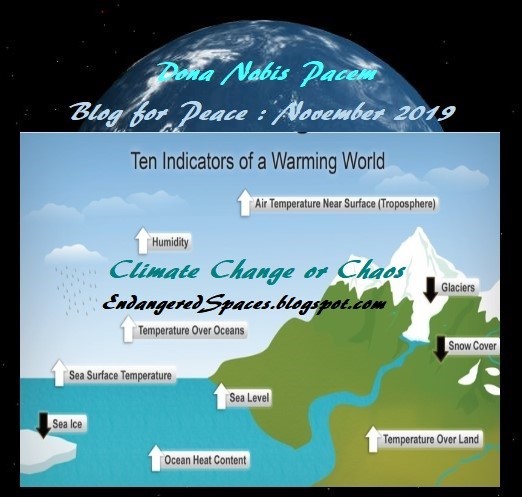 Sorry to be so late with this, but I had to free up my blog from the clutches of Google.  I thought since the blog Endangered Spaces was still posted, that all was OK. Wrong. I think I have to get a domain--fast.

CyberCelt aka Eileen Trainor
Posted by CyberCelt at 1:03 PM 4 comments:

On Monday, November 4, 2019, bloggers all over the world (literally) put on the hat of Peace Blogger. They will dedicate their time and creativity to create Peace Globes and to connect with other Peace Bloggers.


Blog Blast For Peace aka Blog4Peace is the Brain Child of Mimi Lennox.  This makes the 12th time I have participated in this annual event. Since then, Blog for Peace has spread into 202+ countries and six continents across the globe.
'

Due to illness, this blog is not currently being updated.  Please feel free to search for articles of interest or to read older post.  Thank you for reading my blog all these years and I hope to be back up on my feet soon. Blessings, prayers and positive thoughts are appreciated.

What is Endangered Spaces Blog?

Endangered Spaces is a blog about the Earth and the steps we must take to become a force for the positive change we want to see. It is never too late and everyone is welcome.

CyberCelt
Friend to Earth and to the feathered, the fanged, the finned and the four-legged inhabitants of the world.