My Blog Blast for Peace for this blog is a little heavy. This blog deals with what we are doing to Mother Earth and each other in our merciless search for fuel for our vehicles. I thought if we saw the true cost, we might forgo the extra trip to the supermarket, or ride a bike to school, or something . . . 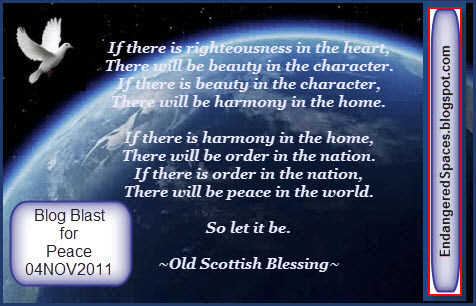 I refuse to accept the view that mankind is so tragically bound to the starless midnight of racism and war that the bright daybreak of peace and brotherhood can never become a reality... I believe that unarmed truth and unconditional love will have the final word. MLK, Jr

If you can, watch the videos below. The lyrics are below the videos.
Brothers in Arms by Dire Straights
Video by Platt 73


Brothers in Arms by Dire Straights
Video by Platt 73

The lyrics talk of a soldier who is dying and realizes he will never go home again. He is thinking of his brothers in arms (fellow soldiers) who have stuck by him. His last thoughts are that all men are brothers in arms and should not fight each other. Then he dies.

War is the opposite of peace and is an ugly, demonic, soul-sucking machine.  How many generations of young men and women will we sacrifice to the guns.  When will the peace be forever?
Posted by CyberCelt at 2:30 AM

I found your article and shared links very beautiful and nice...
You have raise very important point here in this blog. ♥
Headstones

Lovely globe and the verse is just perfect. Peace!

Wonderful post. I'm out of words... love it! beautiful. wow.

I love that old Scottish saying. Beautiful! Peace tou you today and always.

may you find peace in your lifetime.

Peace be with you.
Pam

May peace come to all, today and always

Love the quotes... Peace to us all!

Well said. Best wishes to you and yours for peace, this day and all days.

Peace cannot be achieved through violence, it can only be attained through understanding. ~ Ralph Waldo Emerson

Hello, I am bloghopping on this day of blogging for peace. Thank you for your peace globe and for your post. I think a heavy post is ok when we are brainstorming peace. Good reminders about fuel, too. Peace to you and all around you.

I will need to put some tissue next to my computer as I do my blog crawls today. Wonderful poem and song. Peace be with you!

Pace on earth and ourselves is that too much to asked?i guess it is.

I think I like to start with the peaceglobe...if we live with peace in our hearts, then those around us will be blessed with that peace, and from that it will spread...

What is Endangered Spaces Blog?

Endangered Spaces is a blog about the Earth and the steps we must take to become a force for the positive change we want to see. It is never too late and everyone is welcome.

CyberCelt
Friend to Earth and to the feathered, the fanged, the finned and the four-legged inhabitants of the world.